I met Thierry Bosquet in the 1980s through Philippe Lenaël, one of the first theatre and opera directors to specialise in Baroque historical staging. My meeting with Thierry immediately moved me.

Thierry Bosquet (born in 1937 in Uccle) turned out to be a true soul mate for me (and also for my wife Marleen)! His long and successful career as a painter and theatre designer brought him in many different countries, and even now he is still painting almost every day!

Thierry's imagination is entirely populated by characters from the 17th and 18th centuries, dressed in their own clothes, with their own gestures and expressions. They show us their lives and customs, their tastes, their wealth and poverty, and before we realize it, we feel the eternal echoes in our hearts when looking to them... Thierry is in love with this beauty, this theatricality, these curls and frills that were part of the life of the time!
Thus, in his house in Uccle, there are a dozen miniature baroque theatrical scenes, carefully and lovingly assembled and painted, in which all sorts of characters are active - each in a space of about a cubic metre... Everything lives and talks in it, we are in the middle of it, so to speak... This is not a meticulous "reconstruction", but a powerful fantasy, a communicative energy, which blows over this "old" design!
The "baroque" bursts out everywhere in this simple house: everything is theatrical, artfully arranged and applied - the eye does not know where to look first. Even the modest garden contains many baroque and classical sculptures, as you would expect...
The painting studio itself, on the top floor, is relatively small. Everywhere there are folders containing gouaches (landscapes, figures, allegories, still lifes) and drawings for theatre sets.

Thierry is not aiming to receive many visitors, he seems to like being alone in his kingdom. As a visitor, you are welcome, but he is not an exuberant guide in his domain... This modesty characterises him.

In 1993 we asked him to create the sets and costumes for Antonio Caldara's opera "I Disingannati" (a carnival opera based on Moliere's Misanthrope - Vienna, 1729), which we performed with LPB at the Innsbruck Early Music Festival, of which Réné Jacobs was then the artistic director. I can still see Thierry in front of me, there in the studio of the Landestheater, painting the costumes (yes!) in his dashing, baroque style. It was unforgettable and impressive - he was in his element! Later, in the nineties, he painted on a large window in our house in Asse: sometimes he worked with two brushes at the same time - one in each hand! In this way, the flowers came out of his imaginative brain incredibly quickly...
In 2001 he published a beautiful book on "Versailles Disparu" - On the one hand, he painted for this book many famous buildings and gardens still existing within this incomparable domain, but on the other hand, he also includes paintings of many constructions and views that unfortunately have disappeared by now. 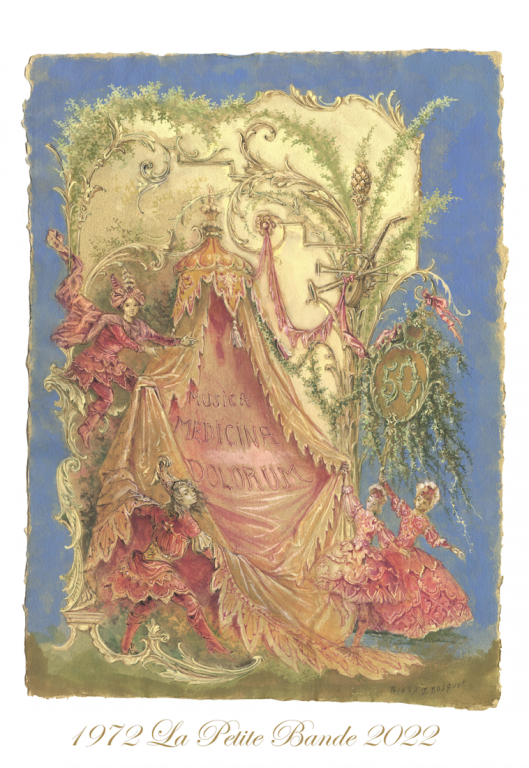 In the spring of this year 2021, we asked Thierry Bosquet to create a painting for the 50th anniversary of La Petite Bande in 2022 - a painting that we planned to offer for sale to our public in a very high quality reproduction, in order to strengthen the financial support for our  festive commemoration-programme. Without hesitation, he agreed to our request and, what is more, he donated the work to us, because of his affinity with our music and the special anniversary, in the hope that the orchestra might benefit from it...


In the light of the difficult Corona-period we are all going through, we suggested that he weave the motto "Musica Medicina Dolorum" into the scene - which he accepted and did with great elegance... So you can get a magnificent print of this painting from La Petite Bande, and thus support the ensemble in the realisation of its 50th anniversary programme.

Please transfer your payment to the account of:
"Votre Petite Bande"
IBAN: BE30 4310 6868 0111
BIC : KREDBEBB
Please clearly indicate the format you choose, and your postal address.

This print will be sent in a sturdy roll, together with a beautiful colour photo of Sigiswald, signed for you by him.

Herman Siebens, manager of the orchestra (herman@lapetitebande.be), will carefully follow up your order.


... Isn't this a somptuous Christmas-present for your friends and family?... 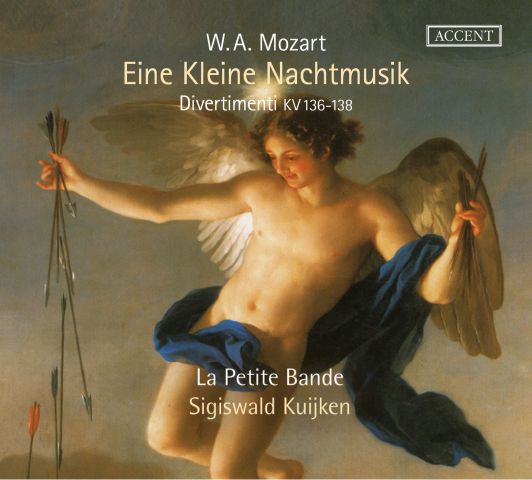 Eine Kleine Nachtmusik
La Petite Bande recorded Mozart's Kleine Nachtmusik early 2021 for ACCENT , in combination with his 3 Divertimenti for strings (KV 136 137 and 138). This CD is without any doubt the first and only on the market, which presents these indeed well-known works in the so typical historical “diverimento” -string ensemble from Mozart's time: 2 violins, viola and double bass (instead of violoncello) ! This might have sounded the serenade orchestra under your bedroom window if you had lived in late 18th century Vienna…

Transcriptions for string quartet by the composer or someone else was common practice in Mozarts time. In that light this string-version of Mozart's Requiem is nothing special. What makes it special, is the circumstance of the original Requiem itself. It is known that Mozart left the majority of the work incompleted, and that on request of Mozart's widow, his pupil Süssmayer did the finishing job. Where one's work ends and the other's starts, no-one knows. This 'skeleton-version' of the Requiem, however, fully preserves the eloquence of Mozart's music and therefore perhaps proves that the Requiem contains more of the masters own composing than we can objectively establish. But incomplete as the Requiem is, Mozart's universal genius radiates through the notes in any version. And if anyone can bring the radiation to the surface in this version, no one better than the Kuijken Kwartet. 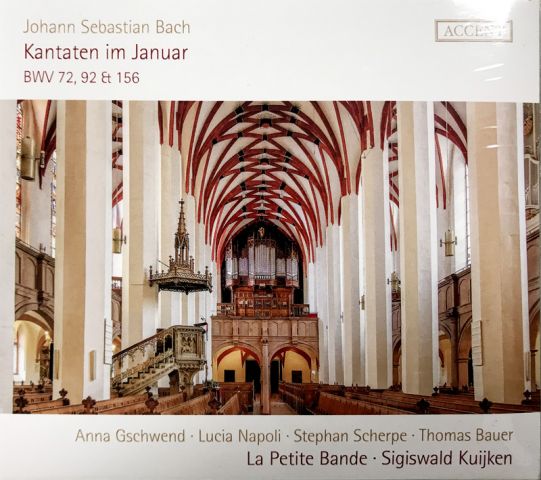 We would like to make a positive note in these corona times. At the end of November 2020 a new CD of La Petite Bande was released by the German CD company ACCENT, on which 3 beautiful cantatas by J.S.Bach can be heard: BWV 72, 156 and 92.
Although in a strict sense it is not typical "Christmas music", this Bach recording will certainly contribute heartwarmingly and thoughtfully to a deeper experience of this corona-coloured end-of-year period of 2020 and of the months to come ...

This new CD from LPB is available on the market - but can be delivered quickly via LPB itself, at the price of 26 € (shipping costs are included).
You can order by paying into the account of Votre Petite Bande:
IBAN:  BE 30 4310 6868  0111   (not   .... .... 6888 etc , as initially indicated by mistake  on this page, sorry!)
BIC: KREDBEBB
Please clearly state your postal address when ordering ! (If you would like an invoice, please also mention 'invoice').
This recording was made at the beginning of February 2020 in the somewhat futuristic theatre in Blaibach (Bavaria - you can see it via Google as soon as you enter "Blaibach"...) which was built in 2014 on the initiative of the German baryton Thomas Bauer. You can also listen to Thomas Bauer on this CD: he participated as a soloist and bass in the vocal quartet !

Finally, due to the corona crisis, this recording was the last activity of LPB this year 2020: all the other projects of 2020 were cancelled one by one from March onwards, or postponed to a later date, which often had to be cancelled again  ...
The future of cultural life all over the world remains uncertain ... La Petite Bande has enough plans, the audience will be able to enjoy our performances again as soon as possible! 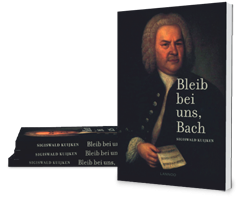 'Abide with us, Bach” now in promotion
From February 2020, the book which Sigiswald Kuijken wrote in 2013   “Abide with us, Bach”  is in promotion : the number of exemplars is now limited! You can obtain it by offering a donation to the orchestra  (which is still suffering from the loss of all official subventions since several years) :
How to proceed to donate?

Interview: Mattheüs Passion in Amsterdam
Intimate like 300 years ago: The baroque music visionary Sigiswald Kuijken conducts the St. Matthew Passion with a small ensemble. In a small band, this seems as strong as in the great Amsterdam Concertgebouw... 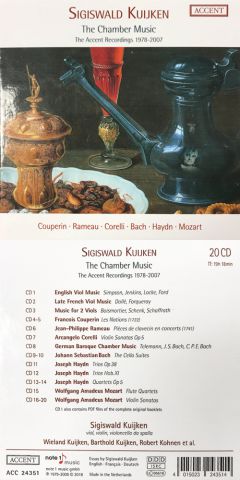 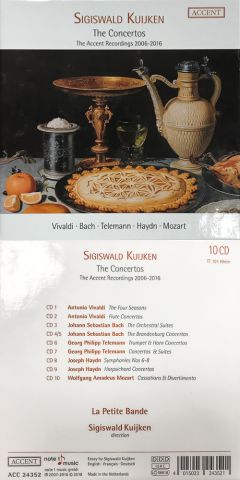 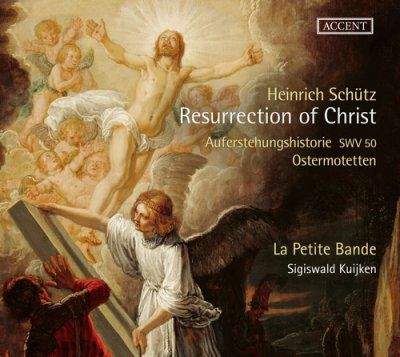 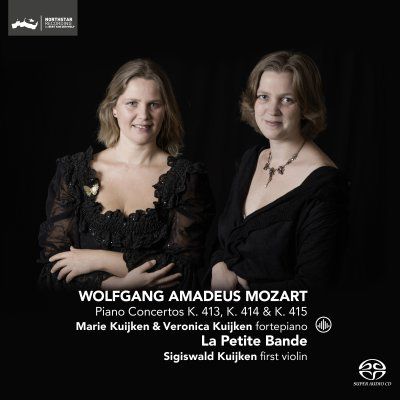 New release: Piano Concertos K. 413, 414 & 415
Sisters Marie and Veronica Kuijken have joined their father Sigiswald Kuijken in a new recording Wolfgang Amadeus Mozart – Piano Concertos K413, K414 & K415 (Challenge Classics CC72752) that offers a new twist on period performance.
Mozart wrote these three concertos for harpsichord or fortepiano, with full orchestra. He also wrote them in such a way that the wind parts might be omitted, and the traditional four string quartet instruments used to create a chamber version of the work. Clearly, this called for very careful string writing and attention to balance. Colour, too, will have been a consideration for Mozart as he wrote for winds to enrich the orchestral texture.
This recording uses fortepiano with the quartet version but makes one important change. Conductor and, in this instance, first violinist Sigiswald Kuijken has replaced the cello with a double bass. His argu¬ment for this is that Mozart would likely have assumed that most private buyers of his published score owned harpsichords and would have chosen the chamber version, where the harpsichord was better balanced with the four string instruments. In choosing to record with the more robust fortepiano, the louder, richer bass was an equally robust alternative to the cello. Additionally, switching to double bass moves that pitch an octave lower, creating a fuller, more orchestral effect for the small ensemble.
The choice is a calculated but clever and effective one. It places a larger scale work in an intimate setting for a very satisfying and engaging performance. 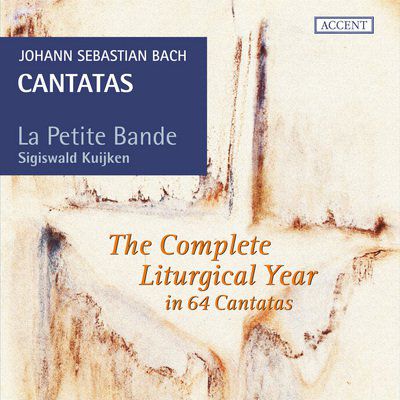 New release: Cantatas for the Complete Liturgical Year in 64 cantatas in 19 CD's
Dir. Sigiswald Kuijken
Your browser is out of date.