Operamagazine.nl, a specialized online opera magazine of the Netherlands, has publiced an in depth recension about our performance of Così Fan Tutte for the celebration of 50 years La Petite Bande, last 22th of December in Amsterdam Concertgebouw. We publish hereby a summary in English.

13/12/2022
A legitimate question from traditionalists, especially with operas pre-1800: why put so much effort into historically informed instruments and playing methods when the visual aspect is often modernised to the point of absurdity? Director Marie Kuijken tries to better harmonise ear and eye, for which Così fan tutte lends itself perfectly.
With this Così, Marie's father Sigiswald Kuijken celebrated the 50th anniversary of his orchestra La Petite Bande on 11 December at the Concertgebouw of Amsterdam, in an appropriate but not grandiose manner, given an actual 'petite' arrangement of the score. Mozart certainly did not have a string quintet plus two horns in mind in his sophisticated orchestral treatment; however, together with the boldly 'old-fashioned' staging, this provided a unique glimpse on the delightful opera.
The minimal orchestra received maximum response in Marijke Sileghem's costuming. All the ruffles, feathers and embroidery, thickening the historical examples somewhat, were a feast for the eyes. Entire flower beds towered on the ladies' hats, matching the garland around a swing that, with a small table, formed the simple setting. Seated in the curve of the harpsichord, Kuijken inspired his musicians in such a way that I was hardly bothered by the reduction, then surely common practice 'in the province'.
The biggest plus, however, was the close connection between text, recitation and gesture, intensively worked out with the mostly young singers. Shrewd details in Da Ponte's libretto, ignored in many a stage direction, were given spotlights, both in arias/ensembles and in the dashing but discreetly accompanied recitatives. Pointing out examples is difficult but early in Act Two, Despina, dressed in grey yet sexy, handed out tiaras to her mistresses, illustrating that women should rule over lovers like queens. Soon after, the suddenly timid men appeared tied in flower chains. After all, 'Amor lega le membra' says Guglielmo.
The soloists did not give each other an inch in terms of acting. I found it fabulous how the thin thread between truth and farce never snapped. The comedy was squeezed to the last drop: the connoisseur with the libretto fresh in his memory could enjoy an unparalleled rich palette of expression this afternoon. Ambiguity is the true lifeblood of Così fan tutte, about which this extraordinary performance left no doubt.
Martin Toet for Operamagazine.nl
Read the article in Dutch here 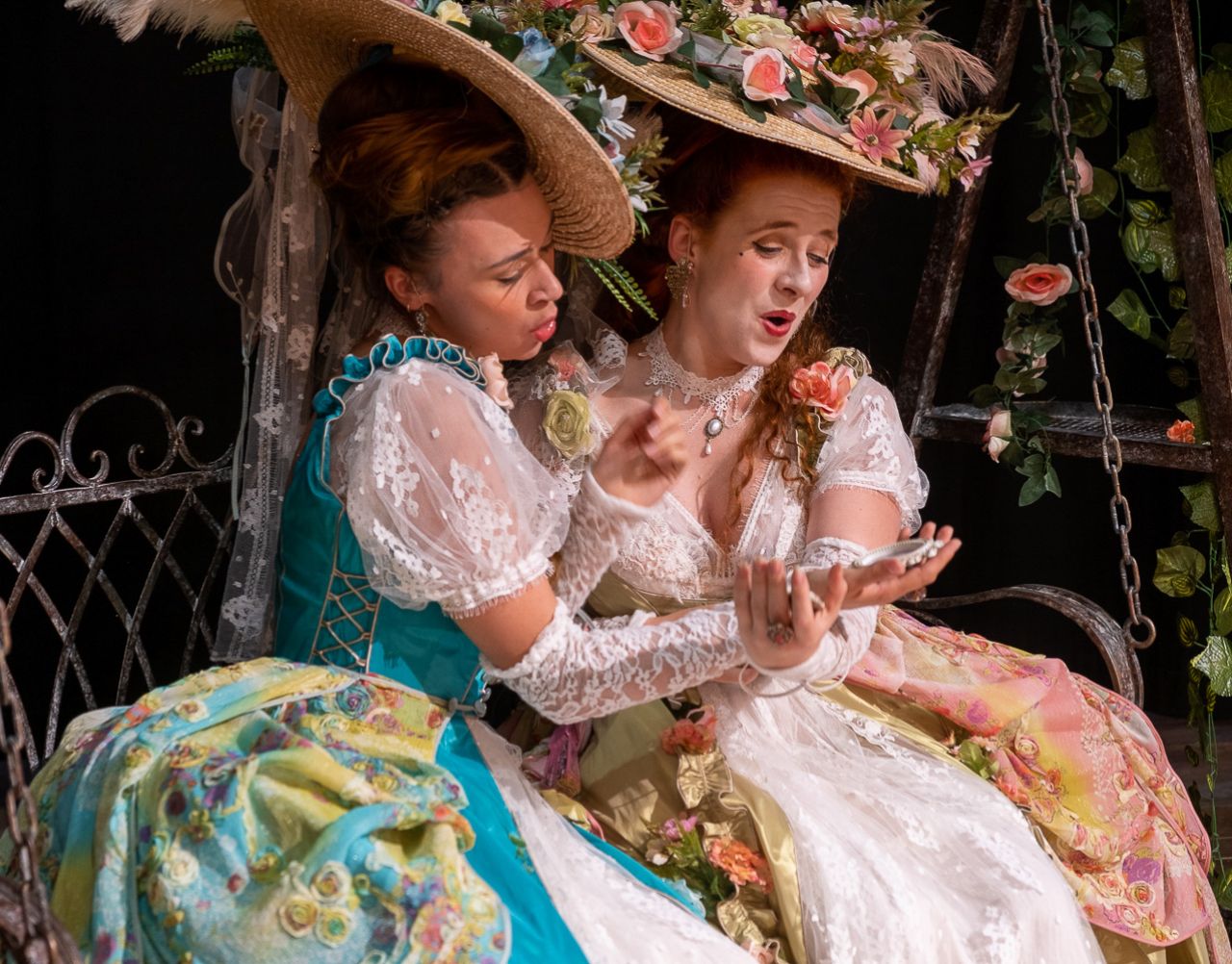 Come and celebrate with us!

La Petite Bande presents you with Mozart's "Così Fan Tutte". The ensemble's musical quality is combined with flamboyant costumes and an intense acting style that harks back to the theatrical body language of the 18th century.
Musical and visual aspects are thus brought together in a harmonious unity and allow the original vivacity of Mozart's and Da Ponte's magnificent comedy to run wild.

"Così Fan Tutte" is the third of the great operas Mozart/Da Ponte opera's: the most original and the most mature of them. La Scuola degli Amanti, "The School for Lovers" is the opera's real title, and indeed: the four young and tempestuous lovers have a lot to learn... but all six personnages have their own difficulties in this burlesque adventure, until at the end everything unexpectedly comes right.

As was often the case in Mozart's time, Sigiswald Kuijken has arranged the opera's score for chamber ensemble: a string quintet with double bass and two horns, supported by a harpsichord to accompany the recitatives. A welcome consequence is that the relationships between singers and individual instrumentalists have naturally become closer and more intimate, both musically and humanly: a real troupe !

We look forward to greeting you to celebrate and enjoy Mozart's extraordinary music and Da Ponte's fine humour together.


More information
Your browser is out of date.